by NightFury2001
After 3000 years, the new forum is up, and we can finally start this thread!

So, as the title says this is where you can draw someone else's OC! I'm not sure if I'm completely done with the rules, but here's how it's going to work for now at least:

-Instead of one person posting an OC, then another person drawing that OC and posting their own etc., I've decided to go with something a bit different. After someone posts an OC, everyone will draw that one OC for around 5 days, then someone else can post an OC and we'll move onto that one. However, we won't move on until an OC gets at least a few drawings, and you have to wait a while before being able to post an OC again after yours gets drawn. I feel like this approach might be more fun, allows one person to get multiple drawings on their OC in different art styles, and it also allows those who don't want to draw the ability to participate.

-When posting your OC, at the very least give basic info about their appearance so people know what to actually draw, posting drawings of them if you have any would also be nice. Including info about their personality/abilities/etc. is also helpful as it gives people a better idea of your OC, and might inspire someone to come up with a cool pose or scenario to draw them in. While you may only post one OC at a time, if an artist is feeling like it, they are welcome to include other characters if they feel like it. For example if someone posts a dragon rider OC someone may want to draw their dragon with them instead of just drawing the rider.

-Please make sure it's actually an OC, and not an AU version of Toothless but his eyes are one shade lighter. I may have events in the future for things like creative AUs or something, but for now this is only for actual OCs. The OC can be from any existing franchise, or an entirely original creation.

-Feel free to post art even if it's just a stick figure drawing! This is all for fun so don't feel bad if you don't think your art is amazing. You don't have to make a super detailed colored drawing with a complex background if you don't want to/have the skills to make it.

-Lastly, be nice and stick to the forum rules. Probably doesn't need to be said, and I trust y'all, but still. Please don't post any art or OCs that are too "adult", and please don't insult someone else's art.

That's it for now...can't really think of anything else. I'll probably update this later, so stay tuned.

I hope this ends up being successful and we have a lot of fun!

Next up: Lucina (Whitefang)

by NightFury2001
Since I'm the OP, of course I'm gonna make one of my OCs the first one lol. After thinking about it for a bit, I have decided on...

Everyone seems to love her, so why not?

So if you don't know, Little Moon is my baby albino Night Fury OC. She is smol and precious. How can you not love her?

(Warning very big image that I'm too lazy to resize at the moment.)
Spoiler: click to toggle 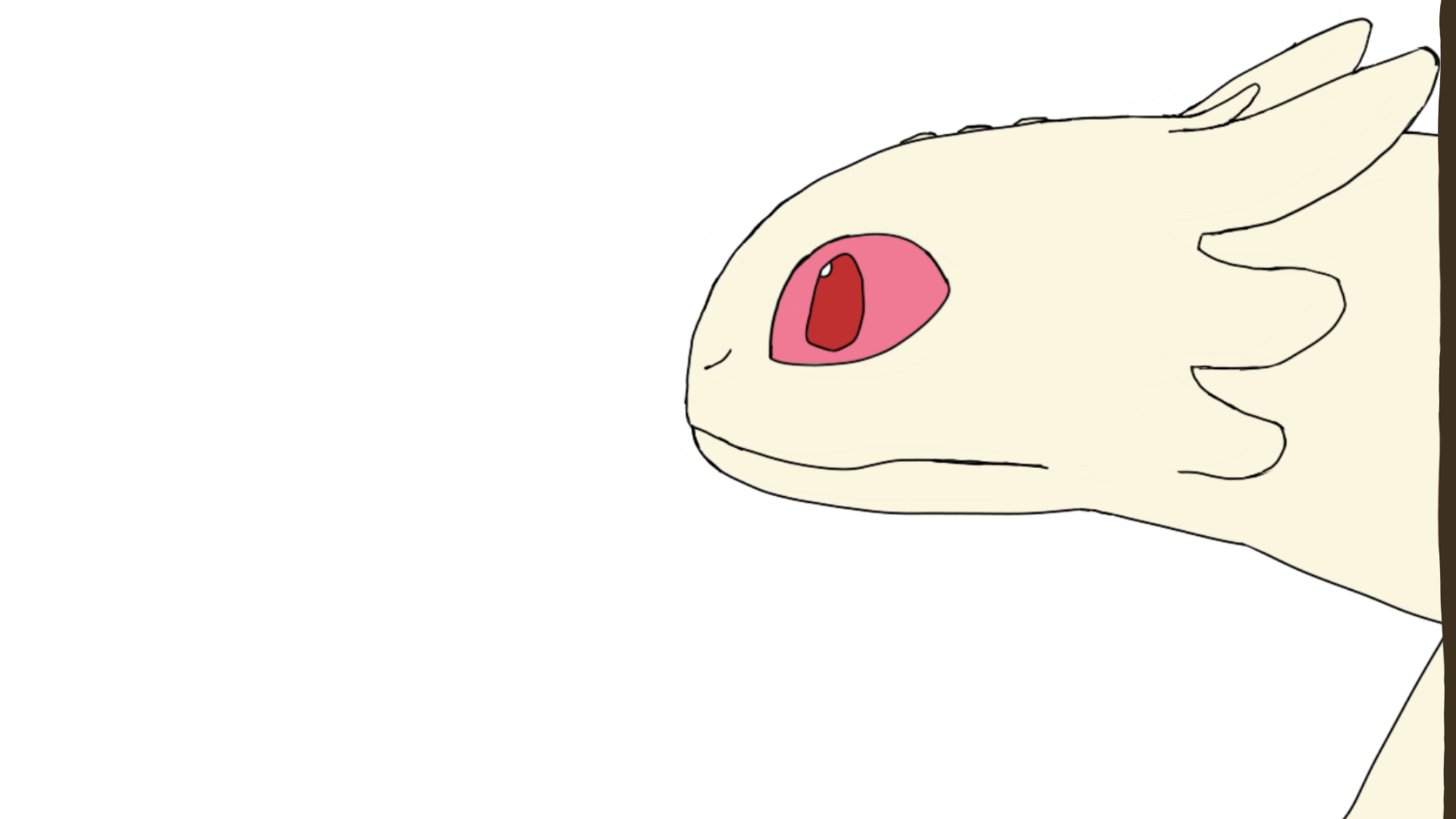 More info about her
Spoiler: click to toggle
So this is Little Moon (thinking of Kahvata for her real name), she's a young albino Night Fury, made mostly because I was salty about the Light Fury lol. She's one of my OCs that can fit into the HTTYDverse (well as an AU/if you think there are other NFs) even though she was kinda made just for my crackverse. xD

Backstory (and also minor(ish) spoilers for if I ever write this HTTYD fanfic/this part of my crackverse): So her parents abandon her due to her odd coloration and the fact that she's a sickly runt, but luckily Hiccup and Toothless happen to pass by shortly after and they rescue her and manage to nurse her back to health. They're of course super excited to have finally found another Night Fury (they might think she's some sort of subspecies at first because of her coloration lol), and Toothless ends up being her parent/mentor. I remember someone here (I think it was Singetail?) brought up the idea of Toothless finding a younger Night Fury and him ending up becoming their mentor and I liked that idea so yeah. xD

Crackverse version would be pretty similar, Shadow would be off exploring/doing his own thing and would come across her (she gets abandoned just like in the HTTYD version) and would rescue her and bring her back to James and Alicia and actually I don't think I've posted too much about them here whoops most of y'all are probably kinda confused right now...ANYWAY she survives (of course). Shadow ends up really caring about her because while he acts pretty edgy most of the time, he's not heartless. Besides she's the only actual Night Fury he's ever seen so far/been around so that's nice, even if he isn't actually a Night Fury, plus she's super young so they can't actually have conversations or like fly together or anything loool. TL;DR: Edgehog dragon adopts smol white bean.

Other stuff about her: Since she's an albino, she has worse eyesight than normal, so she would probably end up leaning on her other senses more. She's a runty runt and would end up only a bit larger than the average male, which is very small for a female. She's not a blinding white...she's got a bit of a yellowish tint.
Spoiler: click to toggle
Little Moon's abilities and stuff

-Is so cute that she deters attackers.
-Can scream very loudly when in danger, thus alerting Shadow/Big Scary/etc. causing them to rush over to help within 2.8798598739 seconds with a 99.9% chance the attacker (if there is one) gets wiped from that plane of existence.
-Is young so she can't talk yet but she tries! Good job Little Moon!!! I'm sure you'll learn someday!!!!!
-Smol bean...precious smol bean...she must be protected AT ALL COSTS.
-Because she's an albino, her skin is more sensitive and she has worse eyesight than normal, she also can't camouflage like a normal Night Fury but that's okay! Shadow loves her anyway! He helps teach her how to work around her weaknesses.
-An advantage of her odd coloration is being able to camouflage in spots you wouldn't expect a NF to be able to...like clouds, snow, your white bed sheets, and Shadow's floof.
-She's very very rare...which means once she starts getting older and begins to travel around, people are gonna start hearing about a "white Night Fury", which means dragon hunters are totally gonna be after her. big oof

She also appeared in the story I'm writing...I'll link to that in a bit. I'm sure most of the people who are interested in drawing her have read it already anyways. xD

by Whitefang
I had so much fun drawing her!! I made her a little big bigger than a tiny baby, hope that's okay with you. Hope you like it! 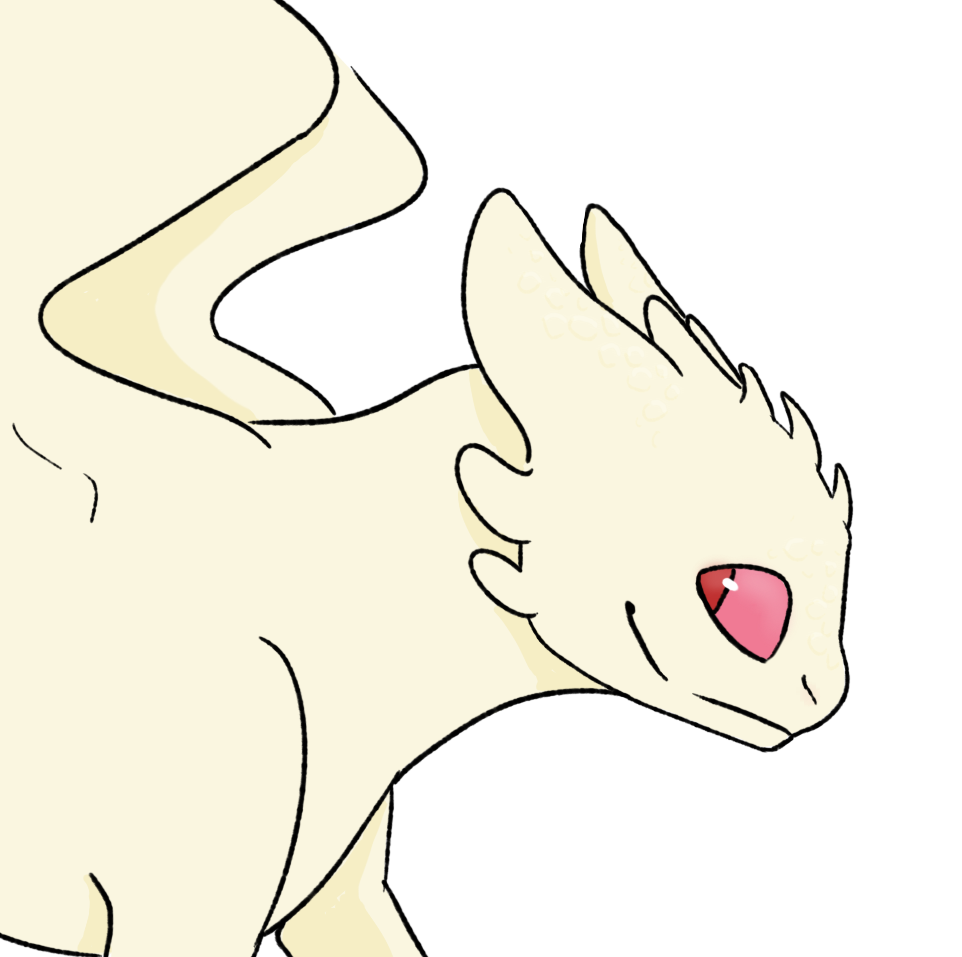 I had so much fun drawing her!! I made her a little big bigger than a tiny baby, hope that's okay with you. Hope you like it!

LOOK AT MY PRECIOUS DAUGHTER AAAAAAAHHHHHHHHH!!!!! Thank you so much, she looks amazing!

by Tuffnut'sChicken
Little Moon and Toothless.

Aww! She's so smol there. xD Thank you, it's really cute!

by Night_Stalker
Alright so I have been planning on making a new oc so Ill just post it here cause why not and wanna help get this thread started.

Dragon (optional): Skrill
Name: Storm
Gender: Female
Color: grey under belly and black fade to blue scales
(dont have to draw Storm just included her just in case someone was willing or intrested in doing both)

Any questions just let me know, i dont mind if anyone changes or adds clothing items or styles. you all have free reing i just want to see what you all come up with

So do we have a system for who has their turn when? I just mean if someone wants to post their OC, but someone else gets to it first, do they just wait a few days and then hope to have a chance before someone else does, or should they say, "Hey, if it's okay, can I go next after so-and-so's done?"

Does this make sense?

So do we have a system for who has their turn when? I just mean if someone wants to post their OC, but someone else gets to it first, do they just wait a few days and then hope to have a chance before someone else does, or should they say, "Hey, if it's okay, can I go next after so-and-so's done?"

Does this make sense?

Yeah I plan on having a sort of queue, probably determined by who posts first lol. For example Night_Stalker would be next up as they are the 2nd person to post an OC.

Yeah I plan on having a sort of queue, probably determined by who posts first lol. For example Night_Stalker would be next up as they are the 2nd person to post an OC.

So, it would be really good if you could work out the details for this

. I was planning on posting my OC here, but Night_Stalker beat me to it

. Perhaps a 3 art contribution threshold before next person can post their OC?
All times are UTC
Page 1 of 5
Powered by phpBB® Forum Software © phpBB Limited
https://www.phpbb.com/