by BooksAreLikeDragons
In this thread I am hoping to get a clear and complete clarification of what is and what isn't officially canon in the HTTYD franchise, for myself and everyone else. (It would be good if the moderators could perhaps make this into a sticky thread within the relevant section of the forum.)

From the information that I know and what other people have told me, this seems to be what is officially canon:

—The TV series (Riders and Defenders of Berk, Race to the Edge)


This is what apparently isn't canon:

—Almost all of the games (except from School of Dragons)


That's all I can think of at the moment. Please feel free to add anything else if you can.

by Dragondog
Pretty sure the short films are all canon

Pretty sure the short films are all canon

I will edit the first post of the thread to include that.

by Light Fury
I agree. School of Dragons is... semi-canon? If it can be called that? There are a few canon elements, and a few that are definitely not canon. AFAIK, it doesn't add anything to main canon, but stays true to it for the most part. Although the ship battling stuff was berzerkers and outcasts last time I checked.

by BooksAreLikeDragons
Hmmm... I wish there was a more clear-cut answer. For now, I'll assume that it's canon.

I'm guessing that the Live Spectacular isn't canon? (Since the new dragon species which appeared, such as the Egg Biter, have only been in Rise of Berk, which is not canon.)

by Dragondog
I think the Live Spectacular is an AU. So not canon, but it takes elements from canon and adds its own spin on it

by NightFury2001
(Posting this on the forums as well since some people who don't go on the chat may be interested in it.)

It depends on who's canon you want to go by...on one hand you have Dean basically saying that the TV series is meant to be canon, and from what I know Richard Hamilton (it was one of the RTTE guys at least) said EVERYTHING was canon (or something along those lines), including things like the games (which seems to be at least somewhat true since Dragonvine (which was co-written by Dean) has things from SoD of all things, a game most would definitely consider to be non-canon), but then later on he said Legend of the Boneknapper Dragon isn't canon because of complicated behind the scenes reasons, and then you have animators that actually worked on the movie saying most people on the crew haven't even watched the TV series, and that he only considers the movies and the shorts like GotNF (since they were made by a lot of the same people that worked on the films) as canon.

So it's complicated lol. I'll just leave you with this:
Spoiler: click to toggle 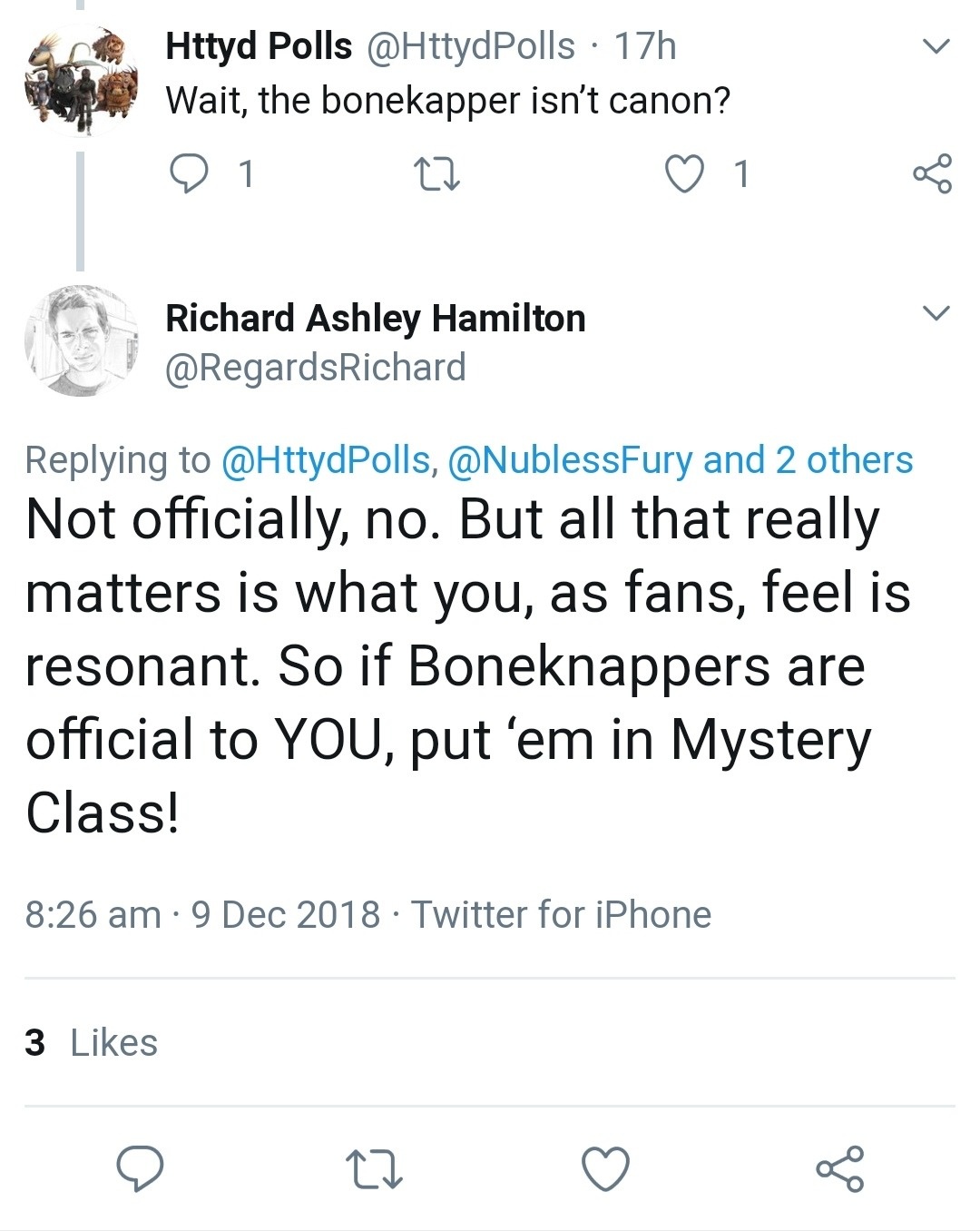 So, go with what you personally feel is the most canon.

For me the movies ( and shorts like GotNF are king, and if anything contradicts them or doesn't fit into their world I don't consider if canon. If it fits into their world just fine and doesn't contradict anything, then even the most obscure piece of lore from a random promotional page in a magazine can be accepted into my canon!

by Dragonrider's Fury
As a partly-related sidenote, School of Dragons is actually (I think) the only one of the games (except possibly for Rise of Berk) that has any amount of canonality whatsoever. They actually have worked closely with Dreamworks. I can't seem to find it now, but somewhere on the SoD forum, there was a thread in which it was stated that the devs received at least some the models straight from Dreamworks.

by Thornrdrum
^ Dawn of New Riders is the only game confirmed as canon by Richard, with School of Dragons having elements that are supported by the novels.
All times are UTC
Page 1 of 2
Powered by phpBB® Forum Software © phpBB Limited
https://www.phpbb.com/